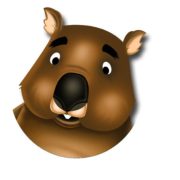 In the world of personality types there are many models that use many different names to categorise people, although in truth most of these models seem to be based on just a few theories, namely those of Jung and/or Myers-Briggs. AusIDentities is no different and incorporates the theories of both of these systems, we simply chose to use Australian Animals to represent the personality types that we identify and work with instead of letters, colours or more abstract names.

So when people question the use of these particular animals, as they sometimes do, we tell them it is because the characteristics of these four in particular most accurately reflect the kinds of qualities that we would like to highlight as being part of the innate personality types they represent. Of the four animals though, it is the Wombat that most often comes under scrutiny. “Why the Wombat?” people ask, “aren’t they just slow and cumbersome?” or some similar comparison.

To understand why we chose the Wombat then, it might serve people to understand a little more about this often-maligned little Australian native marsupial. Firstly, they are not slow. Although they usually do take their time they can easily outrun a person, and are capable of speeds up to 40km/hr over a short distance. This quality relates to personality by virtue of the fact that, generally speaking, anyone in a rush to complete tasks is more likely to make mistakes, something the Wombat personality type dislike immensely. For the Wombats, slow and steady usually wins the race.

Wombats pride themselves on their accuracy and attention to detail, therefore rushing, working under extreme pressure or leaving things until the last minute will usually be counter-productive to the type that wants to do things right. If you are looking at ways to improve your relationship with the Wombat(s) in your life, then make sure you do things right the first time, have a plan, leave time for contingencies, and definitely do not take short cuts! This also applies to students of this type, who simply want to be shown the correct way to complete tasks, and also dislike chaos of any kind.

The Wombat in nature is an intelligent, hard-working little creature, that likes to return to their burrow after foraging for food. They are also shy creatures, avoiding contact with people and generally keeping to themselves. These qualities are typical of the Wombat personality type, who dislike too much fuss, especially made in public where a simple token of your gratitude or esteem would suffice instead. The home environment is also hugely important for them, and the phrase ‘A man’s (and a women’s) home is their castle’ may well have been written with this type in mind.

As for the ‘hard-working’ quality, which they undoubtabley share with their animal name-sake, this is an attribute that, while very admirable, can sometimes get them into strife. Part of the personal growth for the Wombat is learning when to ask for help and understand when the deadline is unrealistic; when in order to do a proper job, more time needs to be taken or more personnel involved. Instead, these diligent people will often drive themselves to the point of burn-out or breakdown in order to meet the deadline. It seems that just when they need it most, common sense is abandoned in favour of an uncompromising approach to tasks. They will get it done on time if it kills them! The same approach by students of this type will often see them staying up late just to get their homework or assignments done.

Absolutely the rest of the world can learn to work with the Wombats, putting work, duty and responsibility first, and by not changing your mind or altering the plan at the last minute. We help them by being consistent, and putting accuracy and consistency above short cuts and often ill thought out new approaches to tasks. However, it is not just up to the rest of the world to accommodate the Wombat Personality type, and to have true collaboration we must also ask the Wombats to accommodate us.

Self-improvement for all Wombats often means recognising the difference between needing to have something done and wanting to have to have something done, and by understanding their way is not always the right way, even if it is the preferred way. Innovation means sometimes discarding what was in favour of what could be. That is not to say Wombats need to abandon consistency and routine, especially when circumstances require those qualities. It simply means that by taking a more flexible approach to work, life and learning, the Wombats can eventually come to embrace the subtle art of being at peace within chaos. After all, the only constant in life is actually change!

What do teachers want?